January 2015 Newsletter
Landmaster is licensed as an Oil and Gas Well Operator by the Railroad Commission of Texas with operator #484659. The company currently operates 24 wells: 1 gas well, 18 oil wells, 3 saltwater injection wells and 2 more oil wells currently being completed. Landmaster or its management owns between 35% and 100% of all its properties. All of the wells are located in Railroad Commission Districts 7B and 7C.

Haskell County, Texas; Landmaster successfully funded the Swenson lease project which involves the rework of 6 oil wells. There are a total of 8 wells on the lease. One was producing and another is a water disposal / injection well. This property has produced over 2.5 million barrels of oil over the past 60 years and is still going strong!

In September of 2014, the Swenson #14 well was reworked and was completed with much higher than expected oil production. Landmaster had anticipated a total of 80-100 BOPD from the entire Swenson 8 well project. The #14 initially produced 277 BOPD and now steadily produces approximately 40 BOPD.

In November, the Swenson #12 was completed with production averaging 20 BOPD and 800 BWPD. The well was squeezed to reduce the water and the well is currently producing 10 to 15 BOPD with 300 BWPD using a pump jack. The well will be placed back on the screw pump in late January in hope of pumping it off and increasing oil production. There are still 3 more wells on the Swenson to be reworked. Landmaster anticipates the total production on this project to average 150 BOPD.

The Swenson 2A well produces 5 to 6 BOPD and 20 BWPD. The Swenson #6 well had a Neutron log which indicates the Upper Swastika Sands with 18 to 20% porosities and a thickness in excess of 20 feet. It appears this sand covers most of the 500+ acre lease. 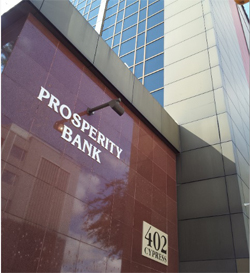 Abilene, Texas; Landmaster Partners is pleased to announce the opening of our second office. It is located in Abilene, Texas. The address is:

This office will handle the accounting and geological records with a bookkeeping staff and Controller. It is located next to the well log library and will also serve as a research hub for our oil field supervisors.

Landmaster begins to rework 3 wells
on the Herring lease.
Coleman County, Texas; The Herring lease consists of 3 wells. Landmaster has identified the Upper Sarratt sand pay zone on this lease as productive. We have squeezed cement across the Upper Serratt Sand and drilled it out of the #5 well. We expect to complete this well in early February 2015.

We anticipate a total of 50 BOPD from the Herring lease resulting in an excellent payout for us and our working interest partners. 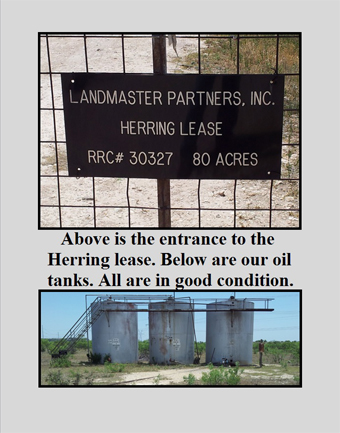 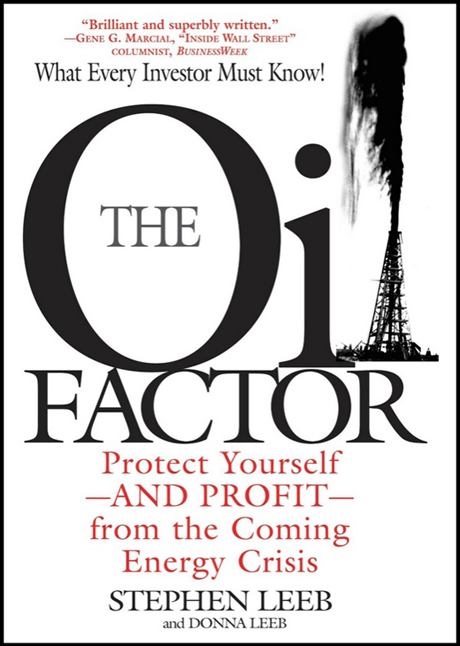 You can pick up a copy at a book store or on Amazon.com

Abilene, Texas; With the decline in oil prices recently, many oil and gas operators or lease owners are selling some of their leases due to decreased cash flow, resulting in the need for cash. Other operators may not be in a financial position to buy quality oil leases that can be reworked due to the fact that they carry large overheads and not enough cash flow. 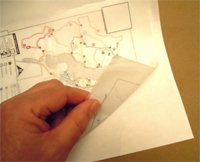 Landmaster is fortunate in the fact that it is not burdened with large overhead and recovers oil at a cost of around $2,000 per well per month, so profits are still very good. In addition, we have a good track record with our current working interest partners that are willing to help fund some of the acquisition and rework of new leases.

We are currently evaluating several new quality oil and gas leases in Texas. Once our staff determines a lease may be a worthwhile prospect, we review the well data with log analysts from Schlumberger and other local companies for further evaluation. If their report is positive, we then review production and other geological data before moving forward on that project.

We believe that many great opportunities will be available while oil prices are low.

For information on our current prospect, please fill out the form below and we will contact you.